A truly unique paradise which is

Hawaii is one of the most sought out tourist destinations in the world and the island state has become almost synonymous with paradise on earth.
The Hawaiian islands, which became US state number 50 in 1959, is placed in the middle of the Pacific Ocean and consists of hundreds of volcanic islands, whereof the 8 largest are referred to as the main islands. The island named Hawaii is the largest, while the state capital Honolulu is situated on the third largest island – Oahu. On Hawaii you will find some of the world’s most spectacular and breathtaking nature – both on land and under the sea! The islands offer everything from bounty beaches and experiences in the outdoors to big city life and parties.

Round trip in California & Hawaii 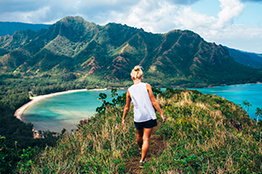 Hawaii offers diversity and opportunity. You can start by sunbathing in the lovely tropical sunshine on a pearly white sand beach with crystal clear blue water, and afterwards go to Honolulu, Hawaii’s largest city, which contains everything that you can expect of a modern American city. From here you can continue on out in to the great outdoors and climb mountains and volcanos as you take in the fabulous nature which the islands display. One suitable method of transportation when on the Hawaiian islands is a bicycle as the islands relatively small sizes are perfect for exploration by bike. 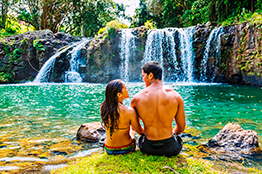 You will not find a more romantic setting anywhere on earth! Invite your loved for a three-course dinner as the sun sets on the beach or bring them on horseback ride through the jungle and enjoy a tropical lunch on the top of a volcano. Watch as the baby turtles are unhatched and take their first waddling steps towards the ocean in the beams of the sunrise.

Diving and snorkeling on Hawaii 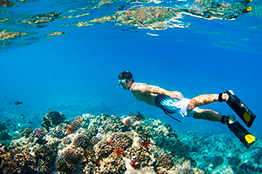 One of the biggest attractions on Hawaii is diving and snorkeling in the clear turquoise water. The islands were formed after large undersea volcanic eruptions, which created the perfect conditions for the creation of large colorful coral reefs. The sights which await you at the bottom of the sea are difficult to put into words and must, as most of Hawaiian nature be experienced in order to understand the immense beauty. You can get up close and personal with the coral reefs and its’ inhabitants by snorkeling close to the coast or by exploring the seabed in full diving attire. The dive will be launched from a boat at sea. Diving off the coast of Hawaii is an unforgettable experience of freedom and beauty, where you may get lucky and meet and great a turtle. 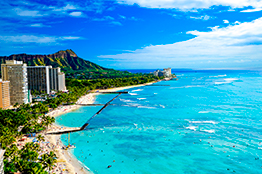 Experience Honolulu and the contrast between the paradise-like beaches and big city atmosphere separated by only a few minutes walk! Even though Hawaii is famous for its’s tropical heat, white sand beaches and exquisite outdoors, it is also home to a large vibrant city – Honolulu. Honolulu is situated on the island of Oahu and the city has it all: cultural experiences, cheap markets, skyscrapers, hotels, great restaurants and much more! In the large marina lay glamorous yachts owned by some of the wealthiest people on the planet. This is also where you will find Pearl Harbor, which was attacked by the Japanese in 1941, an attack which dragged the United States in to the Second World War. It is possible to visit and get a tour of the big base which is still active. Another historic landmark is the 56 tall Aloha Tower, which played an important role under the attack of Pearl Harbor. Today the tower is partially a museum and a central marketplace.

Hawaii has something for everyone! 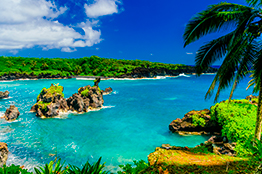 Hawaii is for all ages and has something to offer for every taste. Due to the long beaches and fantastic climate, Hawaii offers all forms of water sports along the coast. Other forms of wet adventures include swimming with dolphins, going deep sea fishing or diving among turtles. If you are more interested in onshore activities, then Hawaii offers some of the world’s best golf courses and world class shopping in Honolulu.

Combine Hawaii with a tour of other states 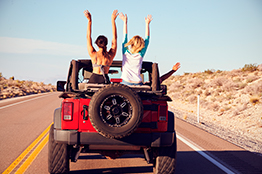 A trip to Hawaii is the ultimate vacation – it is paradise on earth and must be experienced! We can help you arrange your dream trip. Whether you wish to stay near Honolulu, want to visit the other seven main islands or explore some of the other smaller islands, then we can put a tour together for you so it matches your desires. You can easily combine your visit on Hawaii with a tour around California or a trip to New York. No matter where you wish to go, and no matter what you wish to experience during your stay, then let USATours arrange it for you. We are specialists in traveling in the United States, and our travel agents all have many years of experience dealing with travels on Hawaii and the rest of the United States. Contact us and we will help tailor make your dream holiday!

Round trip in California & Hawaii