Warning: "continue" targeting switch is equivalent to "break". Did you mean to use "continue 2"? in /var/www/usatours.co.uk/public_html/wp-content/themes/jupiter/framework/includes/minify/src/Minifier.php on line 227
 Miami, Florida - Travel with USATours to Miami and explore the big cyty!
GET A QUOTE
1223 931777

Experience one of USA's most beautiful cities

and head down to Miami Beach!

Miami is one of the biggest cities in the U.S., and has through a fascinating culture also evolved into being one of the world’s most popular cities.
This is due to the city’s constant sunshine, the many beautiful beaches, the unique big city atmosphere in spite of its coastal location and many other things – Miami is one of the best things the U.S. has to offer, and here you can combine a big city holiday with sunshine and beaches.

Experience the best of the …

Combine a classic trip to Florida …

Miami is the largest city in the state of Florida, located in the southeastern corner of the U.S. A little over 2.5 million people live in Miami and its surrounding suburbs, which makes this coastal city the ninth biggest city in the entire U.S. In 2008, Miami was even awarded “America’s Cleanest City” due to the city’s efforts to plant new trees, recycle plastic, and lower the CO2 emission. Miami’s nickname “The Magic City” refers to the city having a very high population growth. Miami is located just above the tropical climate zone, but still benefits from the extremely good weather all year around. It never snows in Miami, and you have to be unusually unlucky to experience more rain than just sporadic showers here and there. Its nickname “The Magic City” was given due to the city’s growth, and is not entirely without merit. Since the beginning of this century, over 50 skyscrapers have been built in Miami, and they are all 122 meters in height or taller. If you choose to stay at the Four Seasons Tower, Miami’s tallest building, you can enjoy the view from the height of 240 meters!

Because of its status as one of the most popular cities in the world, Miami has some fantastic shopping options to offer the visiting tourists. There are entire districts with stores high and low. It is especially likely to find many Spanish and Cuban stores, because Miami has a relatively high amount of Spanish and Cuban residents. Florida is situated quite close to the coast of Cuba, which many Cubans took advantage of when they fled from Castro in the 1980s. In addition, Miami has always been the place where most Spanish immigrants settled at. Many of the Cuban and Spanish immigrants reside in the district Little Havana, which is definitely worth visiting for all of its restaurants, cafés, and stores that cultivate the Cuban kitchen and image.

If you like partying, spend an evening in the neighborhood Coconut Grove. In the happy 1980’s, and while Miami Vice was shot, this was the only place to be if you wanted to party. Today, the neighborhood is a little more moderate, and has evolved into a hip neighborhood with a large selection of cafés, restaurants, and appealing exhibitions all around. But there is still a very vibrant nightlife! 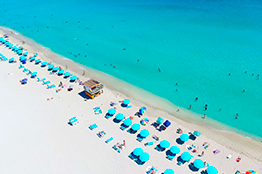 Miami is famous for its amazing beaches. Many associate the U.S. with big, neon lit cities, but Miami has had a part in changing this impression. You will find white beaches, palm trees, beach volley and tanned beauties like the ones from TV series all over Miami’s coastline. Actually, it was the TV series Miami Vice, which was broadcast globally, that really helped sell Miami to the entire world.

If you like sports, especially American sports, visiting Miami is an excellent idea. Miami has teams in most of the major leagues and has a faithful audience among the 2.5 million citizens that support the teams through thick and thin. In Miami you will find many different stadiums, and if you visit Miami at any other time than the summer season, you will have a really good chance of attending a sporting event. If you are excited about American football, the Miami Dolphins are one of the best teams in the league. The hockey team, The Florida Panthers, also come from Miami. Miami Heat is one of the best basketball teams in the U.S., and the Florida Marlins, who play baseball, also have their stadium in Miami. Last but not least, the Miami FC regularly play soccer at the Tropical Park Stadium – even though they are not a top team, and soccer is not as popular as basketball and baseball in the U.S.

If you would like to visit the city, where movies like 2 Fast 2 Furious, Bad Boys 1 & 2, James Bond: Goldfinger, James Bond: Casino Royal and James Bond: Thunderball have been shot, then a holiday to Miami will always be ready to offer you an amazing view, gorgeous beaches and a low price level outside the peak season from December to March.
It is almost natural to spend time in Miami on your holiday to Florida. On a tour Florida, you can experience the amazing Key West, the Caribbean paradise of the US. Additionally, you can visit Naples and the Everglades National Park.

USATours.co.uk specializes in creating tailored holiday packages to the U.S. It is also in Florida where you can experience the American capital of amusement parks: Orlando. In this one city, you will find the Walt Disney World Resort, SeaWorld and the world’s largest water park, Wet’n’Wild. From Miami, it is easy to go on a holiday to Mexico, where you can experience everything from the Mayan temples to the exciting cities and the beautiful beaches. From Miami, there are many departures to the Yucatán Peninsula, for example.

Experience the best of The Sunshine State, Florida, on a fantastic trip!

Combine a classic trip to Florida with a big city trip to New York!

Take a trip to Florida & combine it with a cruise!