In the middle of USA you will find big cities

America offers a wealth of exciting experiences, including destinations that many may not have heard so much about. The country is filled with interesting towns and road trips, which  are guaranteed to exceed your expectations.
There is the world-renowned “Route 66“, where you can have the road-trip of a lifetime, and many see interesting towns along the way. In the central United States you will find many interesting cities, including Chicago. Chicago is an often-underrated city, were you can be entertained with good music, architecture, museums and plenty of cultural features. In the rest of the United States, there are many exciting destinations, and we have listed some of them here.

Road trip on Route 66 is the trip of a lifetime

Chicago is the third largest city in the United States with a population of over 3 million. Chicago is still one of America’s greatest cities and leading in economy, transport and culture. Back in the 1870s there was a great fire in Chicago, which led to major renovations and reconstruction. This meant that the architects took the opportunity to address several of the city’s structural problems – and Chicago is now filled with architecture that has influenced many other cities in the world. The world’s first skyscraper was built in Chicago as a result of the fire and was completed in 1885. The city also has a great nightlife with jazz and blues, as well as numerous museums that you can visit on your trip to Chicago!

Denver is very centrally located in the U.S., and the climate is variable depending on the season. It is one of the most charming cities in the U.S., where there are over 80 different neighborhoods with over 200 parks in the city itself. The closer you are to downtown, the older and more rustic the buildings and surroundings get. The city has one of America’s largest airports located approximately 30 miles away. Additionally, you can see the beautiful Rocky Mountains, as it is only 25 miles from the city. USATOURS.co.uk recommends a trip to Rocky Mountain National Park, if you find yourself in Denver, Colorado!

You have probably heard of Route 66 as it is undoubtedly the most famous highway that runs through the United States. Several films based on the journey across the United States via Route 66 have been made. Route 66 starts in Chicago, Illinois in the midwest, and ends way over on the southern part of the West Coast in Los Angeles. The road is also called “The Mother Road” which refers to Route 66’s role in creating America’s driving culture that we know today. You can travel across Route 66 by motorcycle, car, or camper, and it is also possible to bike along Route 66. An unforgettable trip, which gives an insight into former American culture! 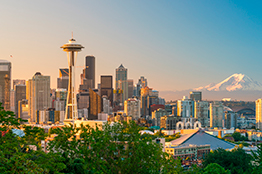 Seattle is located in the northwest corner of the United States, up near Canada’s border. Due to residents’ hospitality and cities many attractions, millions visit the city annually. Seattle is known for its love of coffee and music that will appeal to most tastes. Starbucks was founded in Seattle and is on almost every street corner!

Road trip on Route 66 is the trip of a lifetime