The massive country north of the U.S.

North of the United States lies Canada. An even bigger country known for its magnificent scenery and world-renowned cities such as Toronto, Vancouver and Montreal.

The country also offers an interesting contrast with both native English- and French-speakers. In Montreal specifically, you can experience this combination of dialect. A wealth of fascinating towns and stunning surroundings gives you the option of a fantastic trip to Canada. 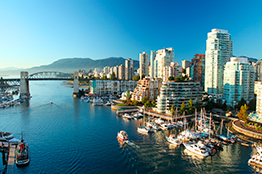 As the title suggests, the neighbor north of the U.S. border is often an overlooked holiday destination. Canada consists of fantastic landscapes and natural sights, as well as unique cities, both large and small. In some cities, you will experience English and French culture mixed together. In Quebec City almost everyone is speaking French! In fact, the Vikings who originally discovered the country in the year 1000 were French.

Many tourists combine a visit to Canada with urban and nature experiences in the west, with a visit to Niagara Falls in the east. You can easily experience both areas by connecting them with a single domestic flight. Canada can be experienced either by itself, or in combination with a holiday to the United States – no matter what, the experience will be unforgettable! 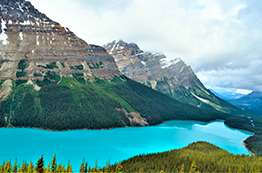 If you like nature, history, and whale watching, Canada’s western part is just the place for you. Here you will find both Banff and Jasper National Park in the Rocky Mountains, whales just outside of Vancouver, and Vancouver Island filled with great experiences in the outdoors. The Million city also offers many cultural and historical experiences, as Asian immigrants founded it. The island of the same name is also worth a visit. It is known for having the world’s most northern lying rain forest, and the main city, Victoria, is very similar to a city from the middle Ages in England – so contrasts are abundant in the area!

Vancouver is located just north of the U.S. border with the interesting city, Seattle, lying only a few hours drive away, which is perfect for a day trip. In Calgary, east of the Rocky Mountains, you will sense the presence of history and experience Canada’s answer to “the Wild West” and the city is certainly worth a visit. Although Canada is incredibly large, you can actually experience all this on a self-drive holiday during a week and a half, without it being stressful. Driving distances are longer than we are used to from Britain, but the surrounding view is crazy beautiful, so the drives do not feel that long.

In Canada’s central and eastern parts, the provinces of Ontario and Quebec offer a superb blend of great cities, nature, and culture. Quebec was colonized by the French, which put a big imprint on Montreal and Quebec City. In Quebec City all signs are in French, and all speak the language – only a few people speak English in Quebec City. For many, Montreal is Canada’s most interesting city. The French / English melting pot is a hub for the country’s diverse culture, history, and people. This represents a curious charm and contrast to Ontario, where Canada’s financial center and largest city, Toronto and Ottawa are located. Toronto is the continent’s fifth largest city and offers an abundance of options.

An hour’s drive south of Toronto lies the mighty Niagara Falls, which is also a must see! Ottawa is very historic and houses the Parliament of Canada. The cities are English speaking and international and very similar to American cities. On a holiday to Canada, it is a fantastic experience to witness the difference between Ontario and Quebec, which in some respects are reminiscent of two different countries. However, Canadians are very aware of the contrasts and have long come to terms with them, making Canadians an unusually tolerant and welcoming people. 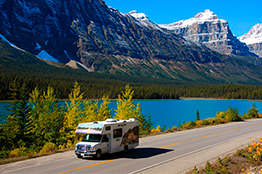 Canada is perfect for self-drive holidays with a motorhome. There are large, wide roads, often with very little traffic in areas with relatively few inhabitants. Do not be intimidated by the idea of a motorhome holiday in Canada – the amount of driving will be nicely balanced with relaxing and experiencing nature.

You can choose whether you want a holiday in the country’s western or eastern part – and with enough time, you can actually do both! There are a myriad of well-situated campsites in the country, and in many cases you can park you motorhome where you please. This gives a special feeling of freedom and self-determination of the pace of the holiday. If you are thinking of a self-drive holiday in the U.S., you can read more here!